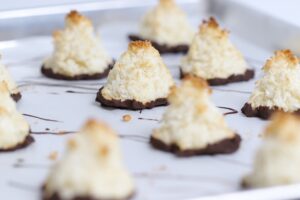 A perfect treat anytime of the year

These Macaroons are easy to make and a great way to infuse fun flavour. Whether you’re mixing some almond flavouring into the coconut mixture, or adding some hints of seasonal flavour to your chocolate. Have fun and make it your own.

Regardless of whether you’re new to baking or an experienced chef, these macaroons are easy to make and delicious! Check the recipe below to see for yourself.

Pro Tip: Adding coconut oil to chocolate achieves a shiny lustre and helps the chocolate to harden or temper. Don’t forget to refrigerate to solidify faster. Refrigerate dipped macaroons for up to 4 days in a sealed container.